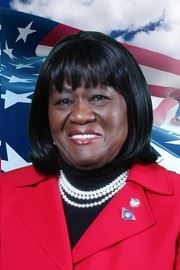 Town of Hempstead Senior Councilwoman Dorothy L. Goosby was elected to the Town Board on November 2, 1999, and was one of the first Democrats elected since 1905. She is the first African American woman to serve on the Town Board.

Dorothy L. Goosby is an alumna of Florida A&M University. She received her Masters in Business Administration in Labor Relations/Corporate Finance and Accounting Management from Adelphi University. Councilwoman Goosby is a New York State Certified and Registered Dietitian with more than twenty-five years of exemplary administrative experience in the medical profession. She attended Hofstra University, Hempstead, New York, and completed the requirements to obtain certification by the New York State Education Department as a Certified Chemistry teacher.

Councilwoman Goosby is the President of the Association Of Towns of the State of New York. She serves on the Executive Committee and the Rules and Resolutions Committee for the organization.

While Councilwoman Goosby's accomplishments are noteworthy, she is most recognized for her ongoing community efforts in Nassau County and the Town of Hempstead. She has initiated community meetings and Town Board evening meetings that provide access and opportunity for more residents to participate in government than ever before. She has intervened in areas that have resulted in a better life for many. These include repair and renovation of streets that were long neglected, parks that were in total disrepair, vacant lots that were littered, and street lights that did not function properly, just to name a few. It is her belief that her election by the people is a mandate to provide equitable representation to all of the residents and that she has a responsibility to make a difference when it is possible and where it is needed.

Councilwoman Goosby lives in Hempstead. She recently lost her husband of 50 years, Anderson Jay Goosby. She has two daughters, Alcina and Cassandra Goosby. Mrs. Goosby is a long-time member of Union Baptist Church in Hempstead.

The First Councilmanic District of the Town of Hempstead includes Hempstead, Lakeview, and Roosevelt as well as portions of Baldwin, Freeport, Lynbrook, Rockville Centre, Uniondale, and West Hempstead.